He went on loan to Blackpool, helping them to clinch promotion to the Premier League in the play-off final. The FAI U21 Player of the Year signed a new four year deal with Everton and he was a regular in Everton's Premier League team playing on the right of midfield in the 2010/'11 season.

His consistent form earned him a first international appearance for Ireland when they beat Wales 3-0 in the inaugural Carling Nations' Cup tie at the Aviva Stadium in February 2011.

He was prominent on the right wing as Ireland beat Italy 2-0 in a friendly on June 7th, 2011. Injury interfered with his football in the 2011/'12 season and he returned to international action in the friendly against Serbia in Belgrade in August, 2012.

Seamus captained Ireland for the first time against Germany in October 2013. He famously captained Ireland to a UEFA Euro 2016 victory over Italy in Lille and became permanent captain ahead of the 2018 FIFA World Cup Qualifying campaign.

He scored his first international goal, on his 40th appearance for Ireland, in a 1-0 win against Georgia at the Aviva Stadium in October 2016.

Following the appointment of Stephen Kenny, Kenny retained Coleman as his skipper for the FIFA 2020 World Cup qualifying campaign and the UEFA Nations League campaign in 2022. 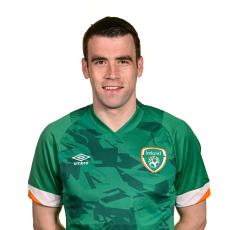