Scored her first senior goal against Northern Ireland in 2013 and her second in 2015 against Costa Rica.

Member of the 2010 U17 side which reached the European Championship final and World Cup quarter-finals.

Joined Florida State University last summer and helped them reach 2013 NCAA final  before going one better in 2014 and becoming the first Irish women to play on an NCAA title winning team. 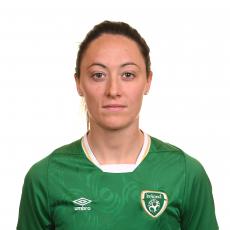