The Derry-born centre-back was a regular at the heart of the U21 defence and progressed to captaining the side.

He was promoted to the senior international squad for the summer friendly games in May and June 2014. He made his debut with a solid display against Costa Rica in Philadelphia.

The talented defender previously played at underage level for Northern Ireland and the former Foyle Harps youngster joined Everton in 2008.

He had loan spells at Burnley, Scunthorpe and enjoyed a loan spell with Yeovil Town in the Championship in the 2013-14 season.

Duffy signed for Blackburn Rovers on a three-year deal in 2014 and has been a regular in the Ewood Park side's defence ever since.

He picked up his second cap against Switzerland in March 2016. His fourth cap came in his first competitive start against Italy at UEFA Euro 2016.

Duffy scored his first international goal away to Georgia in September 2017. 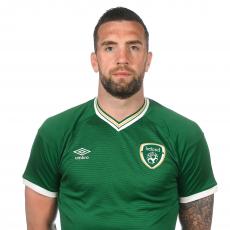