CONOR SAMMON became the latest player to make the journey from the Airtricity League to international football when he made his Ireland debut against Poland in February 2013.

The Dubliner emerged with Cherry Orchard and joined UCD as a teenager where he learned his trade under Pete Mahon.

Malahide native Sammon proved to be a valuable asset with the Students and won U21 honours before he made the switch to Derry City and from there he was snapped up by Scottish side Kilmarnock in 2008.

He made 65 appearances for the Killies and an impressive campaign saw him score 18 goals in 27 games and earn a move to Wigan Athletic.

Sammon's size, power and pace made him a valuable asset to the Latics but he craved more regular first team action and Derby County signed the striker in August 2012. He has been a Pride Park regular ever since.

Has his most impressive Irish performance to date in the June friendly against Spain at New York's Yankee Stadium. 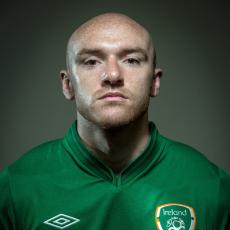