After representing Northern Ireland at underage levels, O'Kane decided to switch allegiance to the Republic of Ireland in October 2011 and played for Noel King's U21s.

He won his first call-up to the Republic of Ireland senior squad in August 2015 for the first time under Martin O'Neill for Euro 2016 qualifiers against Gibraltar and Georgia and made his first appearances for in March 2016 against Switzerland.

The Derry native emerged with Maiden City Academy then spent time at Everton before returning to Ireland and playing in the Irish League with Coleraine.

His form there saw him earn a move to Torquay United and from there he caught the eye of neighbouring Bournemouth in 2012 and he played his part as they progressed to Premier League level.

O'Kane was named in the provisional squad for the UEFA Euro 2016 Finals but was unfortunate not to make the final 23-man selection. 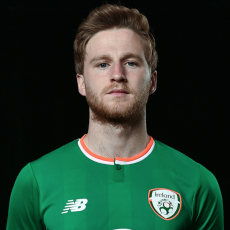