STEPHEN QUINN is one of a number of brothers from the same family who went on to enjoy impressive football careers.

He followed in the footsteps of elder brother Alan by earning senior international recognition in the friendly against Georgia in June 2013.

Stephen started off at St Patrick's Athletic where he made one first team appearance before signing for Sheffield United. He established himself at the Blades and later had productive loan spells at MK Dons and Rotherham United.

Quinn is a very clever midfielder with a sweet left foot and after Sheffield United struggled to get out of League One he caught the eye of Championship side Hull City and moved there in August 2012. He helped the Tigers clinch promotion to the Premier League and caught the Irish management team's attention at the same time.

Stephen was a highly rated member of the Irish U21 team when he played at that level. He made his second senior appearance as half-time substitute against Spain in New York's Yankee Stadium in June 2013 and produced a polished display.

Played in the 2014 FA Cup Final for Hull against Arsenal after scoring in the semi-final against his former club Sheffield United. He joined Reading in 2015. 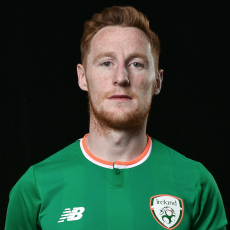