Shay Given made a surprise return from retirement in September 2014 when he was called in to Martin O'Neill's squad for Oman and Georgia. Given had announced his retirement from International football with Ireland in August, 2012, to bring to an end a glittering career.

Given, one of the most popular figures ever to represent Ireland, accumulated a record number of international caps with Ireland. His impeccable sportsmanship and extraordinary loyalty to the team, as well as his magnificent talent, marked him as a special footballer and person and the ideal role model for young players.

Shay never played better in a long and distinguished career with Ireland than he did in helping to keep Russia scoreless in the qualifying match of EURO 2012 in Moscow in September, 2011.

Shay has the distinction of being Ireland's most capped player and he was also a regular team captain when Robbie Keane is not available.

On Wednesday, October 14, 2009, against Montenegro at Croke Park he reached a significant landmark by playing in his 100th senior international for Ireland.

Shay began his career at Celtic before moving to Blackburn Rovers in 1994. However he found it hard to displace Tim Flowers there and as a result he had two loan spells with Swindon and Sunderland before moving to Newcastle United in July 1997.

Shay, who won his first Senior cap against Russia in March '96, was a consistently outstanding player for Newcastle throughout his time there. He remained typically loyal to Newcastle until the club was relegated from the Premier Division in the 2008/'09 season and Manchester City stepped in with an offer he could not refuse.

Injury meant he lost his place in the team and when forced to spend most of the 2010-11 season as substitute he left in the Summer of 2011 in search of regular football. Shay signed a five year contract on July 19, 2011 with Aston Villa. He enjoyed a successful loan spell at Middlesbrough in the 2013-14 season.

He became Ireland's most capped goalkeeper while at Newcastle, ahead of Packie Bonner, and he continued to maintain his impressive form for Ireland under four managers - Mick McCarthy, Brian Kerr, Stephen Staunton and Giovanni Trapattoni.

Ireland's match against Slovakia on 28/03/07 was a particularly proud occasion for on that day Given captained Ireland and equalled Packie Bonner's record of 80 caps. Shay was transferred to Manchester City in January, 2009 after twelve years at Newcastle.

Giovanni Trapattoni appointed Given captain to mark his 100th Cap when Ireland played Montenegro in the World Cup qualifier. He also captained the team when Robbie Keane was missing for the friendly against Norway in November 2010. He returned to international duty in the friendly against Oman in September 2014.

Appeared in the 2015 FA Cup Final for Aston Villa against Arsenal. 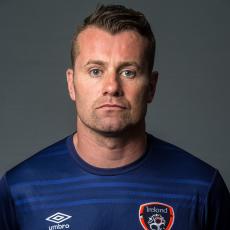