Alex Pearce marked his Ireland debut with a goal against Oman on September 11, 2012.

The tall centre-back was introduced at half-time in the Craven Cottage friendly and settled instantly into international football.

Pearce was born in Wallingford, Oxfordshire, and made his breakthrough with Reading at schoolboy level.

Although he represented Ireland in an under-14 international friendly, the defender played briefly with Scotland and was capped in an under-21 game for the Scots. Pearce then reconsidered his international future and declared for the Republic of Ireland.

He has had loan spells at Northampton, Southampton, Bournemouth and Norwich and has more than 110 league appearances under his belt for Reading. He was the Royals player of the year in the 2011-12 season that saw Brian McDermott's side return to the Premier League.

Pearce won his second Irish cap in the November 2013 friendly against Poland in Poznan. He also impressed in a 0-0 draw with Italy at Craven Cottage in May 2014. He scored his second goal against Oman in September 2014. 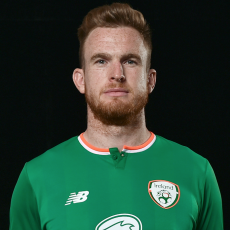