A quick and deadly finisher, Ruesha previously represented Scotland at underage level. Had a spell at Liverpool and scored her first senior international goal in the 5-1 win over Northern Ireland at the 2013 Cyprus Cup.

Helped Glasgow City reach the last 16 of the 2013-14 Women’s Champions League before moving to Sandviken in Norway. After a successful season in Norway she returned to Scotland in 2015 and signed for Celtic.

Scored in Ireland’s last game at the Cyprus Cup against World No.7 Canada and also in the 1-1 draw with Hungary at the 2015 Istria Cup.

Ruesha was named as Player of the Match in the home win over Greece in March 2020. 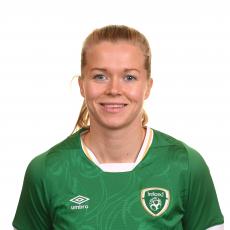