Former U17 and U19 international striker who made her senior debut in the EURO play-off against Iceland in October 2008. Scored her first senior goal in a World Cup qualifier against Kazakhstan the following year.

From Shankhill, Co Dublin, she started her career with Valeview and played for Cabinteely Girls, Stella Maris, Dundalk City and Raheny United before joining Peamount United.in 2011. Scored a record 71 goals in the first three seasons of the Women's National League winning the Golden Boots in 2011-12 and 2013-14.

Her first goal of the 2013-14 campaign against Wexford Youths has become an internet sensation attracting over five million hits and was nominated for FIFA's 2014 Puskas Award where she finished runner-up to James Rodriguez.

Moved duirng the summer of 2014 to French Ligue 1 side ASPTT Albi but left in January 2015 and, after briefly signing, but not playing, for UCD Waves, moved to American side Houston Dash in February before linking up with English side Sunderland. Scored three goals for WNT in 2014 including late winners against Switzerland and Slovakia and notched her first goal of 2015 at Istria Cup with a spectacular long-range volley against Costa Rica.

She scored four goals in four days against Finland and Montenegro in June 2016. Having spent time in Italy with Florentina, she has returned to Peamount United in the Women's National League. 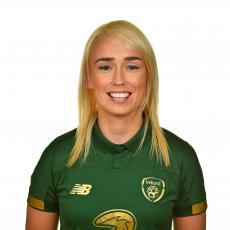