CYRUS won his first Ireland call-up for the UEFA Euro 2016 qualifier against Scotland and the friendly against the USA in November 2014.

He made his first appearance at right-back against the Americans at Aviva Stadium and impressed with his raids down the right flank.

The Coventry-born defender qualifies for Ireland through his Dublin-born grandmother.

He emerged with his hometown club Coventry City as a winger before developing into an attacking full-back. He made more than 100 appearances for the Sky Blues before joining Derby County in the summer of 2014.

His impressive displays for Ireland included a goal against Gibraltar in the qualifying campaign for UEFA EURO 2016 and Christie was part of Martin O'Neill's squad for the Finals tournament in France. 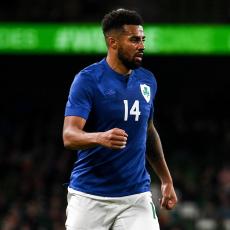