Farewell, thanks for the memories!

Farewell, thanks for the memories!

From Croke Park to Chicago, Lansdowne Road to Lille, Ciaran Murray exits international football with a treasure chest of memories as he bids adieu to his role as Senior Chartered Physiotherapist with the Ireland team.
20th Apr 2020

Renowned injury management expert Ciaran worked with the Senior international squad from the start of the first Mick McCarthy reign all the way through to the final European Championship qualifier against Denmark in the Aviva Stadium last November, the final fixture of Mick’s second term in charge.

In the intervening 24 years, Clones native and Dundalk resident Ciaran saw everything from the highs of Jason McAteer’s goal against the Netherlands at the old Lansdowne Road to the lows of the Thierry Henry handball in Paris with a few bizarre moments thrown in for good measure, not least the Richard Dunne shirt incident in Moscow.

Now he’s set to revert to the role of Ireland supporter, alongside osteopath Tony McCarthy and fellow chartered physiotherapists Colin Dunlevy and Padraig Doherty, when international football finally returns after the COVID-19 lockdown. Famous kitmen Mick Lawlor and Dick Redmond will also be shouting Ireland on from the stands when football gets back onto green grass.

“I’ve been trying to estimate how many Ireland games I have had the privilege of being involved with since my debut at the 1996 US Cup and it has to be close to 300 matches,” the Monaghan GAA stalwart and All-Star winner Ciaran told FAI.ie.

“Over those years I have worked with great players, great managers and great colleagues on the backroom teams and it has been a pleasure from start to finish. The biggest thing for me always was working with the players and ensuring with the rest of the staff that everything was done to enable the players to do their very best for Ireland.

“It’s been a wonderful journey with great memories that will last forever and I want to thank everyone who was there with me along the way, particularly my wife Mary, our two sons and our extended family. Without their support, I couldn’t have dedicated so much time to the Irish team and I thank them for that.

“Stephen Kenny is setting off on his own journey now with the senior Ireland squad and, as I said to him when we spoke, I wish him, his players and his staff the very best of luck. It has been my honour to work with the team since 1996 and I wish them all well now. I will be supporting them from the stands and hopefully, at the EURO finals in Dublin next year.

“I am still actively involved with so many sportspeople at my own practice in Dundalk and I look forward now to getting back to work there as soon as we can.” 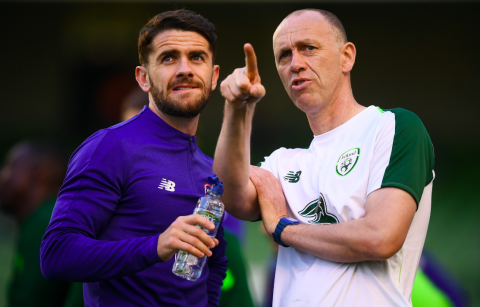 Swords-based Tony McCarthy spent 12 years as the senior osteopath with the Irish team, starting with the appointment of Giovanni Trapattoni as manager in 2008.

“I am so grateful to have been offered the opportunity to work as a sports osteopath with the top Irish players and staff over the last 12 years since Dr Alan Byrne first invited me on board,” Tony told FAI.ie.

“It has been a privilege and an honour to look after great players like Robbie Keane, Damien Duff and Jon Walters initially and then Seamus Coleman, Robbie Brady and James McClean more recently, to name just some of the players I have worked with.

“To witness their commitment and dedication to Ireland and to see how much it means to them to represent their country has been an eye-opener. Watching the efforts of everyone involved with the Irish team, on and off the field, is my greatest and proudest memory of my time with Ireland.

“To have had the opportunity for my wife Anita and children Chloe and Caelen to see me working at two European Championship finals is something I will always cherish. I thank them for their support and Shamrock Rovers for enabling me to work with Ireland and with such a fantastic club.

“I have so many memories. I will never forget the round of applause the players got when they got onto the plane for the flight home from Moscow in 2011.

“I spoke to Stephen (Kenny) last week when he was kind enough to ring and let me know personally that he is bringing his own staff with him. As I said to him then, I will be supporting him all the way. Stephen is a top manager and a great guy and I will be shouting for Ireland in every game in the future.” 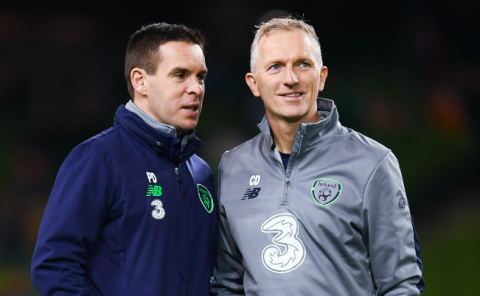 Involved with Irish teams and the FAI for the past 20 years, chartered physiotherapist Colin Dunlevy worked with the senior side under Martin O’Neill and Mick McCarthy for the past seven years.

Employed by the HSE at St Colmcille’s Hospital in Loughlinstown, Colin told FAI.ie: “The stand-out for me has been the professionalism of all the staff, the management and the players involved with all the Irish teams throughout my 20 years with the Association.

“Football is always about the end result and the performance but for the medical staff it is also about the treatment of the players, how we react to their injuries, how we ensure they are in the best physical shape when they go onto the pitch and how we deal with them if they are injured during a game.

“We have always had fun with Ireland teams over the years but our standards of medical care and attention were always the highest and I know that will continue with Stephen now and his staff. I have wished him the very best of luck personally and I would like to do publicly now as well as I look forward to becoming a fan again, a very proud fan.

“My 20 years with the FAI have defined me professionally and I have to thank my family Clare, Cassie, Ailbhe and Lochlann, the HSE and all my colleagues at St Colmcille’s for allowing me the time to work with the FAI as well. In the current circumstances, those hospital staff deserve all the recognition they are getting and I would like to thank them for their support.”

Donegal native Padraig Doherty first worked with the senior Ireland squad in 2016, having previously been involved with underage Irish teams. Now based in Clane and employed by the HSE in Ballyfermot, chartered physiotherapist Padraig has also wished Stephen Kenny and his players well in their EURO 2020 Play-Off.

“It has been a fabulous experience to be involved with the Ireland senior team and I will take many great memories from this time. It has been a pleasure to have worked with so many good people who have worked diligently and professionally together with the sole aim of delivering success for Irish football.

I would like to thank the players, backroom staff and coaching staff for all the support and camaraderie over this time,” said Padraig. “I would also like to thank my family for their support to enable me to make this commitment to the Senior Team so thank you Niamh, Patrick, Maria and Conor.

“The support of the HSE in enabling me to work with Irish football over the last 13 years is greatly appreciated. Finally, I would like to wish the players, Stephen Kenny and his coaching and backroom staff every success in the future." 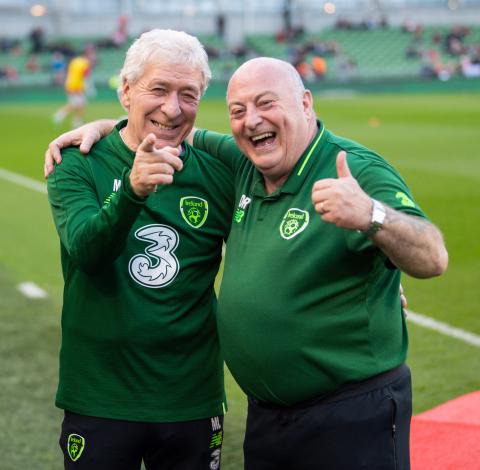 Dick Redmond first got involved with the Irish Under-21 team all of 21 years ago when Bernard O’Byrne asked him to swap his old Whitehall Celtic experience for international football with the squad managed by Don Givens. He took to the role like a duck to water before stepping up to the senior stage when Giovanni Trapattoni was appointed to the Republic of Ireland job in 2008.

“I am very proud to have served my country for 21 years, proud for my family and proud for myself. It has been brilliant from start to finish,” Dick told FAI.ie. “When Bernard first spoke to me, I asked him what I would have to do and he just told me to do what I did at Whitehall Celtic when I was everything from manager to kitman to pitch marker. The advice worked and I have had 21 great years with Ireland.

“It’s a privilege, that’s what I say to people and involvement with international football can happen for anyone, just as it happened for me. I’ve been flying high with Ireland for 21 years and I tried flying as Superman on the night when we qualified for Euro 2016.”

Ah yes, Superman. The video of Dick Redmond dressed as Superman in the Ireland dressing room went viral and even landed him on Sky Sports. What happened to the suit is a different story.

“I lost it in Coppers,” recalled Dick. “We were in Coppers celebrating and I left the bag with the suit in it down beside the bar. By the time I got off the dancefloor, the suit was gone! We never found it. I think the video footage suggested someone threw it into a bin!

“That was an incredible time and there will be incredible times for this Ireland team again. I’ll be shouting the lads to the Euro finals when we get back to football and I wish Stephen Kenny, his staff and all the players the very best of luck. Their success is our success and I’ll be behind them all the way.”

Mick Lawlor is a League of Ireland legend who joined the Irish backroom team when Giovanni Trapattoni arrived from Italy in 2008. Like Dick Redmond, he leaves with a kitbag full of memories and good wishes for Stephen Kenny and the Ireland players as they bid to make Euro 2020.

“I’ve had a 12-year international career with Ireland and that’s exactly what it has been, a career and a wonderful career at that,” Mick told FAI.ie. “I loved every minute of it, working with the players, getting close to the players on the training ground, shouting them on from the dugout and supporting them in every way we could when they were playing for their country.

“Now I will be supporting them from the stands and I will be just as passionate and committed. They play for the whole country when they play for Ireland and I wish Stephen, his staff and the players well when international football returns. I will be rooting for them and I know they will do us proud as they always have done.”

Wishing all the lads well for the future, FAI interim CEO Gary Owens said: "On behalf of the FAI, I want to thank each of them for their great service to Irish football and I join with my colleagues in wishing them all the very best in their careers going forward."