Dave Connell's Republic of Ireland Women's Under 19s picked up their first points of the UEFA Women's Under 19 Championship Elite Round after a 2-0 win over Ukraine in Limerick.

A Ukraine side that shipped five in their Elite Round opener against Finland were put under pressure from the off and it only took Ireland forty seconds to pull ahead.

Good work in midfield played Dearbhaile Beirne in down the left and her cross caused Natalia Zinchenko's charges all sorts of problems.

Failing to clear at the third attempt, Lucy McCartan snuck in to toe-poke past Bondarchuk to give Ireland the best possible start. 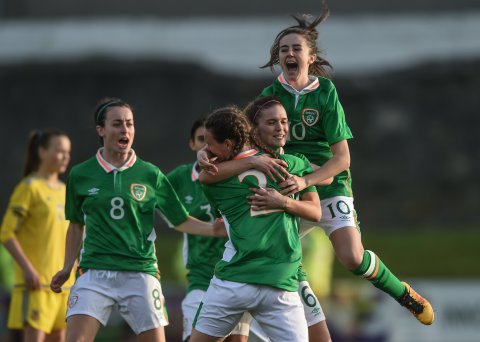 Quick feet from Alex Kavanagh saw her evade two challenges before unleashing a daisy-cutter from twenty-plus yards midway through the first half. The effort was out of the reach of Bondarchuk, but just struck the outside of the post.

The points would have been sealed twenty minutes from time if not for a good acrobatic stop from the busy Bondarchuk.

A quick Ireland throw caught their Ukrainian counterparts unawares, allowing substitute Saoirse Noonan to advance. She picked out Jess Nolan, but the netminder did well - saving to her right.

The decisive goal would arrive a minute before time, however. After a sublimely weighted pass from the boot of Roma McLaughlin, Saoirse Noonan took a touch to set herself before calmly finding the bottom corner to confirm the result.

WU19s look to bounce back against Ukraine

The Republic of Ireland Women's Under 19's face Ukraine in a crucial UEFA European Championship Elite Round tie.

Ireland will be looking to bounce back from last Tuesday’s Elite Round defeat to Scotland when they face Ukraine in Limerick on Thursday evening.

Dave Connell’s side were defeated by a 95th minute penalty in their opening group game, with the Irish Head Coach lamenting the performance of his side.

"I thought we were pretty poor in the first half - not up to our usual standards. We were a bit better in the second half, but overall, I thought we were second best. I'd have been happy with a point but unfortunately it's a bitter pill to take in the end. We can play a lot better than that."

Ireland know a win is required to keep their qualification hopes alive, with suspension and injuries a concern for Connell in the build up to the tie. “Leanne (Kiernan) picked up a yellow so that puts her out of the game now. We took a chance bringing her on - she hasn't been training.

Another bumper crowd is expected in Markets Field, with Connell adding that three points is the aim for the home side. "All we have to do is try and win the two games. We'll pick the heads up and try get back into the reckoning as quickly as we can.”

Republic of Ireland Women's Under 19 Squad to face Ukraine