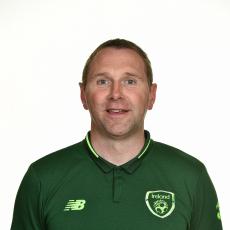 Tom Mohan is a former Finn Harps midfielder and Head Coach of Ireland’s Under 19 team.

A native of Aughadrumsee, Co.Fermanagh, he played seven seasons with Harps having moved to the Ballybofey side in 1998. Having completed his Level 1 coaching badge and UEFA ‘B’ Licence during his playing days, Mohan advanced on to do his UEFA ‘A’ Licence.

A development officer with the Football Association of Ireland, based in Cavan, Mohan was involved with underage Irish set-ups under the management of Sean McCaffrey, Joe Boyle and John Morling before being appointed Under 17 manager in September 2012.

Tom undertook his UEFA Pro Licence with the FAI in 2014.

In 2019, Tom led the Ireland Under-19s to the semi-finals of the UEFA Under-19 European Championships in Armenia.