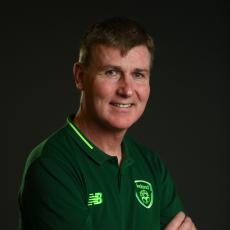 Kenny was appointed as Ireland Manager in April 2020, taking over from Mick McCarthy following an impressive stint leading the Ireland Under-21 team.

The Dubliner is one of the most successful managers in League of Ireland history with six Premier Division titles, one First Division title, three FAI Cup triumphs, seven League Cup victories, two Leinster Senior Cups, and one President's Cup.

Kenny, who is a four-time PFAI Manager of the Year, started his coaching journey with St Patrick's Athletic Under-21s before taking over as Longford Town Manager in 1998. From there, he moved to Bohemians and led the club to League glory in 2003.

In 2004, a move to Derry City saw him enjoy Cup glory before making the move to Scotland with Dunfermline Athletic, who he brought to the final of the Scottish Cup and the Scottish League Cup.

A return to Derry City brought more Cup success as well as winning the First Division before he switched to Shamrock Rovers in 2011, where he won the Leinster Senior Cup.

Kenny then moved to Dundalk in 2012, where his team won five Premier Division titles and two FAI Cups (twice claiming the domestic double), as well as three League Cups, a Leinster Senior Cup, and a President's Cup. In between all of that, he led his team to the group stages of the UEFA Europa League.

In November 2018, he was appointed as Ireland Under-21 Manager and had an immediate impact by winning seven of 12 games that included his team occupying top spot in their UEFA European Championship Qualifying campaign and reaching the knock-out stages of the Toulon Tournament.

Kenny was announced as Ireland Manager on April 4, 2020, with Keith Andrews, Damien Duff and Alan Kelly all confirmed as part of his backroom staff.