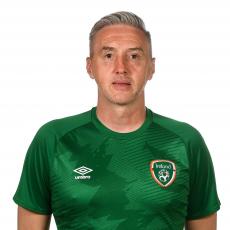 Dean’s international career with Ireland stretched over nine years. He made his international debut in 1999 in a UEFA Euro 2000 play-off match against Turkey, won 11 caps and was a member of the Ireland squad at the 2002 World Cup finals in Japan and South Korea.

His club career saw Dean amass over 750 club appearances during a 21-year spell which saw him play in the Premier League for Charlton Athletic, West Bromwich Albion and Portsmouth.

Currently the goalkeeper coach for Premier League side Crystal Palace, Dean will remain in his existing role at Crystal Palace and link up with the Ireland squad in the international windows.

The goalkeeper coach joined Stephen Kenny's backroom team ahead of the start of the FIFA 2022 World Cup qualifying campaign.