The Sports Capital and Equipment Programme 2020 (SCEP) saw the largest number of applications ever submitted with 3,106 applications seeking funding of over €200million.
9th Mar 2021

Football had its own record with 508 submissions, which highlights a 96% increase on the previous funding programme back in 2018.

The record number of applications from Football was extremely positive to see, following a new educational initiative from the FAI Facility Development Department for all stakeholders on the benefits of the Sports Capital and Equipment Programme. With the help of the FAI Grassroots staff, this ensured this message was delivered successfully to all four corners of the country.

FAI Head of Facility Development Walter Holleran welcomed the increase in Football submissions in the latest round of applications.

“We are delighted with the record number of submissions from the Football community for the Sports Capital and Equipment Programme. A 96% increase in applications highlights a significant appetite for facility development and improvement from clubs and leagues nationwide. The Facility Development Department with support from the FAI Grassroots and Communications staff, set out to inform as many of our stakeholders as possible of the benefits the Sports Capital and Equipment Programme. We look forward to the next steps of the process and raising further awareness to this funding initiative – to which we thank the Department staff for their ongoing support and help.” 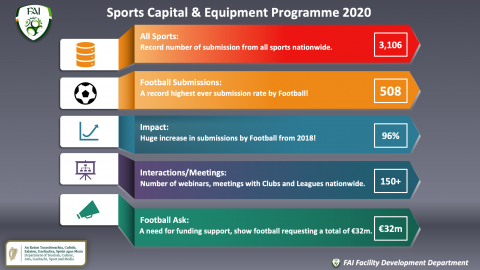 The Facility Development Department began work on the delivery of this message began back in 2020 with an aim to increase the awareness for possible state funding and consisted of multiple public webinars, group eMeetings, Teams, Zooms and one-to-one calls for all interested. Specific League of Ireland webinars were put on to raise awareness of their regional projects and over 150 club consultations working closely with both Grassroots and League of Ireland clubs on their specific needs and projects.

Results of the Sports Capital and Equipment Programme 2020 will be released later this year. A full breakdown of the applications can be found here.