The Football Association of Ireland, Cork County Council and FORAS, the trust that operates Cork City FC, today launched the project to develop a Munster Centre of Excellence, in Cork.
19th Dec 2016

At an event in Cork County Hall today details of the project were announced for the football facility, which will support the provision of training, participation and playing facilities for players of all ages, coaches, referees and administrators, and one that will benefit the wider community and the grassroots of Irish Football.

The site will also provide training facilities for Cork City Football Club at a 30-acre site in Glanmire, 8 kilometres outside Cork city.

The proposed facility has also been identified as a potential Training Camp for teams competing in the UEFA Euro 2020 tournament, for which Ireland is hosting four matches

This vision, led by the Football Association of Ireland and supported by FORAS and Cork County Council, will act as a catalyst to unify the different strands of the game in Munster.

Work on the project is expected to begin in 2017, and is due to be completed within approximately two-and-a-half years. 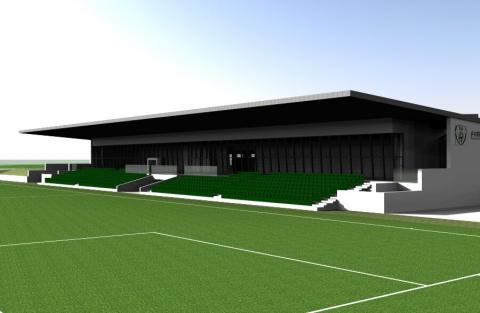 FAI CEO John Delaney today paid tribute to the partnerships that were working together to develop the Munster Centre of Excellence.

“I would like to thank Cork County Council and Cork City/FORAS for the great work that has already been done on this exciting project,” said Delaney.

“This is a multi-partnership project which will include the FAI, Cork County Council, Cork City FC and FORAS, local business, a potential naming rights partner, UEFA and the Department of Transport, Tourism and Sport, and I look forward to working with all parties in the months and years ahead.

“Once complete, this will rival any sporting facility in the country, including the National Training Centre at Abbotstown. I hope to see similar facilities in place in Leinster and in Connaught, putting world-class football facilities on the doorsteps of everyone who plays the game.

“As well as being a training centre and base for Cork City FC, this will be a community facility which will be open for players of all ages, coaches, referees, volunteers and administrators. This will be there for all levels of the game, from our grassroots to our professionals.

Pat Lyons, Chairman of Cork City FC said today: “I am very pleased to be attending this launch on behalf of FORAS and Cork City Football Club. The history of League of Ireland football on Leeside has had many ups and downs, but no club has ever truly established a permanent base. Since FORAS assumed control of the club in 2010, this has been a key aim of ours and we are delighted to see the progress that is being made.

“Since the concept of the project was first raised, we have been delighted at the way that the FAI, Cork County Council and the government have bought into it and we thank all involved for their work so far. We look forward to the project getting underway in earnest in the near future and continuing to work with all stakeholders to bring the project to fruition.

“The support Cork City FC had at the Aviva Stadium for the recent FAI Cup final from clubs across the length and breadth of the city and county was magnificent and we look forward greatly to continuing to build our relationships with the clubs and leagues across Cork. This project will give aspiring and existing footballers in Cork the best platform on which to showcase and develop their talent, and we look forward to working with all strands of the game on Leeside to make the most of this opportunity.”

Chief Executive of Cork County Council, Tim Lucey said: “Cork County Council is very proud to support the FAI Centre of Excellence in Glanmire.  The vision to select such a strategic position will make this facility available to over half a million people, who will be within one hour’s drive of the complex.

"The FAI’s selection also showcases the strength of our region, our economic strength to develop this site into the future but also our strength in sport.  As a Council, we are always proud to support local clubs and local recreational facilities, these are the cornerstones of our communities.  And strong communities enable a strong County.”

“Now, with the collaboration of the FAI and Cork County Council, Cork will be home to an FAI Centre of Excellence.  A development which received unanimous support from the elected members of Cork County Council and will provide a fantastic community and sporting facility for Glanmire, Cork and Munster.

“This development will be home to our FAI Cup winners, Cork City FC, but will also support grassroots sporting capabilities, enabling our future stars to prosper.”

Fianna Fail leader Micheál Martin, who attended today’s Project launch said: “As an avid fan of Cork City FC, I am thrilled to be able to join in the launch of the new Centre of Excellence, in Glanmire.

“Football in Cork City has a proud history - a history steeped in success - and the proposed Centre of Excellence will ensure future generations will benefit.

“This development, a partnership between the FAI, Cork County Council and the trust that operates Cork City Football Club (FORAS), is exactly how sporting facilities should be developed.

“This is an example of different stakeholders working together for the benefit of all.”

The concept of a Munster Centre of Excellence accelerated in 2015, when the FAI made a submission to Cork County Council outlining its vision for the facility in Cork, which resulted in a long lease for the 30-acre site at Brook Lodge, Glanmire.

Construction work on the project, which is at an advanced planning phase, is expected to begin in 2017 and when complete, it will contain the following playing facilities:

The Centre will also house a purpose-built pavilion with viewing area, which will include a classroom, gymnasium, dressing rooms, physiotherapy and medical and team rooms, as well as a community area, and other purpose build facilities.