Mullingar’s Late Night League has helped bring communities from opposite sides of the Co. Westmeath town closer together.
15th Jan 2018

Under the stewardship of Westmeath’s Development Officer Paul Osam, Catherine McEntee from the town’s Midlands Regional Youth Service and local volunteer Alan Devaney (pictured above), players from estates around the town have come out in record numbers in recent weeks to play.

Speaking to FAI.ie, Devaney revealed that that estates of Dalton Park and Grange have come together on the football field in recent years, after previous troubles in the areas.

“The original match was such a success, that it turned into an annual event, which eventually morphed into the Late Night League in the town. From the two estates originally being rivals, many of the players are now friends. It wouldn’t have happened without the help of the FAI and Paul.” 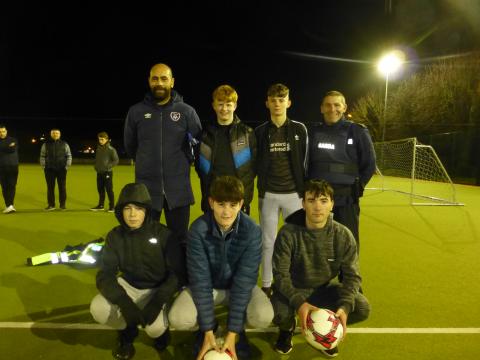 Both Dalton Park and Grange are RAPID areas and Devaney admitted that the work of Osam in the town has helped both areas.

“Many of the players from both estates now play in the same team. Football has made a massive difference to the area.”

Since the Late Night League has started in the town, it has continued to grow and Alan told FAI.ie that record numbers took part in the final night just before Christmas.

“We dont use referees. The players have to referee the games themselves. We had over 60 players at the final night and there was no rows over the six weeks.”

“Everybody knows Alan and has huge time for him. We hit it off straight away and have a brilliant working relationship.”

“Alan was telling me about the relationship between Dalton Park and Grange, and I had the idea of trying to have a game between children from both estates. Catherine McEntee and two local Gardai Neil Donellan and Tomas Blake were a massive help.”

“The first game was played for 12 and 13-year-olds, and a mutual respect grew for each other. As the players got older the concept had run its course and decided to set up the Late Night Leagues for the players.”

“A lot of the players played in the original Garda Challenge Cup and have become friends. There is a respect through sport for all the players.”

“The profile of the Late Night League in Mullingar grew in recent months which helped the numbers. It was a great sign that most of the players were disappointed when it ended. They are already asking me when the next competition will take place?”

Paul says he has seen players from all ages develop both on and off the field, and it’s something he takes great pride in.

“I get the most pleasure out of seeing players I would have dealt with as younger becoming successful themselves. If we have had 1% in helping out there it will have been worthwhile”.