2014 winners St Patrick’s Athletic progressed to the last eight of the Irish Daily Mail FAI Cup thanks to goals from Conan Byrne and Christy Fagan at Richmond Park. Pat’s took the lead on 42 minutes when Byrne controlled a diagonal ball across the park. He darted in from the right before firing low into the bottom left corner, with his strike taking a deflection off a Limerick foot in the packed goalmouth as it creeped past Freddy Hall.

Fagan missed another chance to extend the Pat’s lead less than a minute into the second half when he met Ian Bermingham’s pass but fired wide in one of those situations when it looked easier to score. But Fagan got the second on 77 minutes when he headed home from close range after Sean Hoare had headed Mark Timlin’s corner back into area.

Wexford Youths pulled off the shock of the night as they beat an in-form Sligo side at a wet and windy Ferrycarrig Park. Shane Dempsey gave the hosts the lead in the 20th minute and went in at the break with the lead intact. Raf Cretaro brought Rovers level just after the hour mark to bring Sligo back into it, but in the third minute of additional time Andy Mulligan slipped the ball under the onrushing Micheal Slingermann to give Wexford a famous win and a place in the last eight. 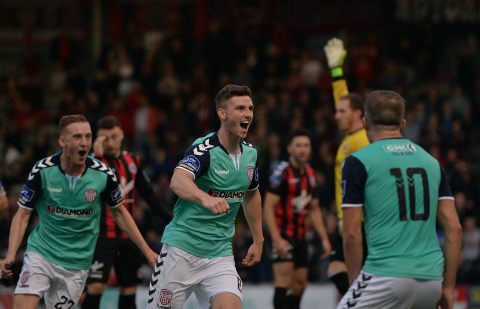 Derry City came away from Dalymount Park with a deserved 2-0 win thanks to goals either side of half-time from Harry Monaghan and Nathan Boyle. Monaghan opened the scoring as he reacted quickest in the area in the 39th minute following a free kick and slotted home from six yards. Nathan Boyle sealed Derry's place in the next round in the 48th minute with his strike from 12 yards going in off the post to send the travelling support wild.

A ruthless second half performance by Shamrock Rovers cast aside a brave performance by their First Division hosts. Five goals after the break put the cup specialists into the hat for the last eight with Gary McCabe, Sean Boyd, Brandon Miele, Simon Madden and James Doona all getting on the scoresheet for the Hoops.