To celebrate International Women's Day 2021, FAI.ie spoke with FAI Board Member Ursula Scully (pictured second from right at the FAI AGM in December 2019) about her journey through Irish football, and her hopes for the future at all levels.
8th Mar 2021

FAI.ie: Can you briefly take us through your football journey from its beginnings to the present day as an FAI Board member?

US: From volunteering at my local club in Nenagh as part of a fundraising team when my children were very small, I started working with the North Tipperary Schoolchildren Leagues as the Fixtures Secretary. During my time with the NTSFL, I have taken on several roles, and am currently the League Secretary and Emerging Talent Co-Ordinater for both the boys' and girls' game.

While Secretary of League, I became the NTSFL representative on the SFAI Council, who I then in turn represented on Senior Council.  The SFAI nominated me for the board of the FAI in December 2019, where I was elected to represent the Underage games for both boys and girls.

FAI.ie: What are the main changes you have seen in that time, that have improved girls' and women’s football?

US: The main changes I have seen are obviously the increase in numbers participating. For example during my time involved we have went from running girls' leagues within my local league at U12s, U14s and U16s to now running leagues at every age group from U10s up to U18s.

There has been an increased emphasis on attracting not only players but also female coaches, referees and admistrators. This has been helped with the running of female-only Coach Education courses as well as the Women In Leadership Programme. The 20x20 Campaign has made advances in highlighting visibility of women in the game and was widely adopted.

FAI.ie: We are seeing a massive increase in participation numbers at all levels. How important is this for the game?

US: Participation is key to the game, regardless of the level. Growing the game at the grassroots level through schools and clubs exposes more girls to the game and provides them with more opportunities to play longer and more competitively. Providing the girls' games with excellent coaches and role models and running initiatives in schools with links to local grassroots clubs have also had a positive effect on participation. Seeing full houses in Tallaght Stadium in the Senior Internationals shows the hunger for the female game and the levels that can be achieved. An emphasis on grassroots programmes in particular the AVIVA Soccer Sisters where girls as young as six are introduced to the game, is massively important.  Leagues throughout the country have invested in their own League ETP programmes with the Gaynor Cup growing in strength and numbers year-on-year. All this feeds into the WNL and the Senior Women's Team. 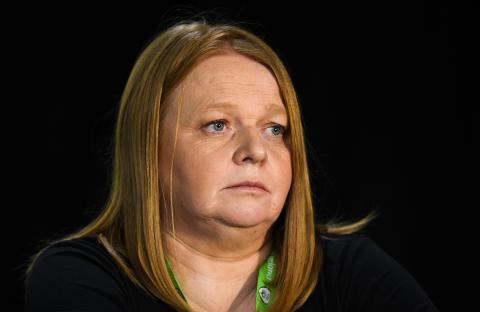 FAI.ie: From the grassroots up to the WNL, there is now a clear pathway for girls and women to play the game. Will this help player retention?

US: A clear pathway where players can progress to the very highest levels in the game is vital. This all begins at the grassroots level. Excellent work is being done at both club and league level through League ETPs and the FAI Centres of Excellence's Regional programmes. These are providing girls with the opportunity to progress to the WNL and the international setup.

FAI.ie: No matter the level or role, how can we see more women take on leadership roles in clubs or leagues?

US: 2020 saw the first class of the Women In Leadership Programme graduate.  This group of women came from all strands of the game including Schoolboys and Schoolgirls Leagues, the Junior game and the League of Ireland with various roles in administration and coaching from U8s right up to the League of Ireland. The added bonus of this course was to create a network of strong women working within leadership roles in all strands of the game across the country.  The programme which was supported by the FAI and FIFA was a hugh success. Initiatives like this and the female-only Coaching courses will encourage and facilitate more women to get involved.

There is an exceptional pool of talented women working across the game at every level. It is our job to ensure that this talent is encouraged, facilated and nurtured to ensure that we make our game the best it can possibly be.

FAI.ie: Where would you like to see the female game in ten years’ time?

Ideally we would love to see our International teams at both underage and senior levels consistently qualify for the European Championships and World Cups. I would love to see a fully professional WNL and participation levels in the grassroots game that match that of the boys and men.