The FAI’s Coach Education Pathway 2017-2020 has been tailored to suit the needs to coaches whose ambitions are to work in different strands of the game – grassroots and volunteer level to elite/professional level.

“It is hugely important that coaches around the country understand their role in fulfilling the Player Development Plan and the restructuring of the Coach Education Pathway will facilitate those that wish to coach with grassroots clubs and those with ambitions to work with elite players,” said FAI High Performance Director Ruud Dokter.

“The coaches we have here today represent the different strands of Irish football that we are looking to cater for. It’s not just about the Elite but also ensuring the game improves across all levels. Coaches are vital for this.”

FAI Coach Education manager Niall O’Regan said: “The pathway is based on the theory of reality based learning and is directly aligned to the FAI Player Development Plan.

The significant change to the grassroots pathway means that now coaches enter in the reality based learning model at the level they are coaching.

Grassroots coaches seeking to progress to the Licenced level must complete a minimum of 40 hours of grassroots education before entering the Licence pathway at the D Licence Level.

“Another positive of the new pathway is that the progression to Licence Level for grassroots coaches now represents a significant cost saving of €125 on the previous pathway,” added O’Regan.

From Grassroots Pathway in which the coach has completed 40 hours of grassroots education and then applies for the National D Licence.

Once a coach has completed their National D Licence they then progress onto National C Licence. It is also the case that this is also the entry point for SSE Airtricity League or Elite Players.

Once a coach has completed the National C Licence they will be recommended a time frame to progress to the UEFA B. Specialist Criteria: Under UEFA Convention, a former/current player whom has a minimum of five years of active playing (minimum 10 appearances annually) in the SSE Airtricity League or higher can enter at this phase.

Coach can enter this once they have an A Licence. 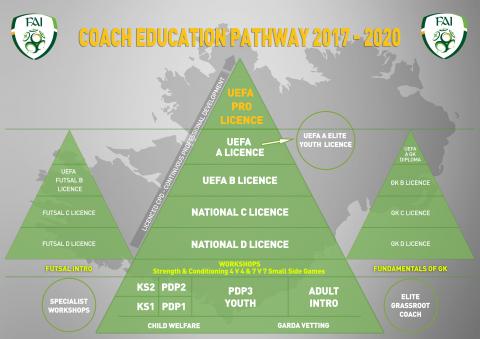