There were reasons to cheer in Waterford in recents weeks, as an Ireland underage international secured a place in America with a Third Level scholarship.
20th Oct 2020

Tega Agberhiere has represented Ireland at underage level, but saw his promising football career almost end in April 2019 when he had two friends were the victims of an attack that scarred Agberhiere's face and body, and could have blinded him.

The Waterford native returned to the pitch this year with the Waterford Under-19 team in the SSE Airtricity League. Agberhiere had also enrolled in the FAI-ETB Course in Waterford, under the guidance of Paddy Carey and Mark Barry.

His time with the ETB has seen the teenager return to the field, and earn a move to Western Texas College, in January.

Agberhiere told the Waterford News and Star that his time on the ETB course was crucial in earning the move to the USA.

"I think that the FAI course helped me loads in terms of getting back into a routine at a stage when I didn’t really have much happening or good going on. When I started the course, I just put my head down whether it was class work or on the pitch and that helped me stay focused. Paddy, Mark and all the lecturers were great."

Paddy Carey is the Course Co-Ordinator in Waterford, and he added he was delighted to see Tega move on in his footballing career.

"The support he has had from his family, his football family, classmates and the general public has been very rewarding and appreciated. The platform to showcase and the support shown from the WWETB and the FAI and his education providers at Litton Lane has been very important.

“I think that this goes to show how courses like this can change lives if the person wants it enough."

Pictured Below: Tega and his mother Christie, with Mark Barry (left), and Paddy Carey (right) 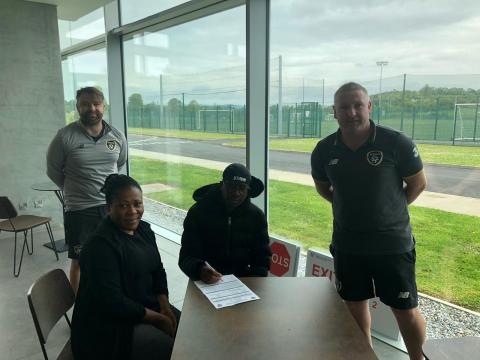